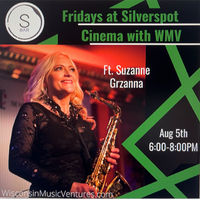 Join us at The Corners of Brookfield Silverspot Cinema's S bar for more evenings of live music!

Suzanne Grzanna is a Multi-Award Songwriter, Saxophonist, Vocalist, Arranger, Producer, Music Publisher, Sync Music Library and Billboard charting who composes (Music & Lyrics), and is member of the Recording Academy, SAG-AFTRA, and Guild of Music Supervisors (Friend). She has nine albums released on her label Diva Records and has recorded over eighty jazz songs in total of her own compositions and other musicians' releases. Her music has been featured in many films and played across the globe on radio. She has performed for many music festivals and private events. Suzanne loves to connect with the audience and share her love for music with them. She is very passionate about creating and loves being a part of the amazing musical community. Suzanne will be releasing an original jazzy EDM song titled “Simply Sunday After Hours” (2022) and a jazz album in (2022). In addition, Suzanne has a Jazz Instrumental, Jazz Vocal, and Jazzy EDM/Downtempo Music Library that’s One-Stop 100% Master and Publishing Owned.